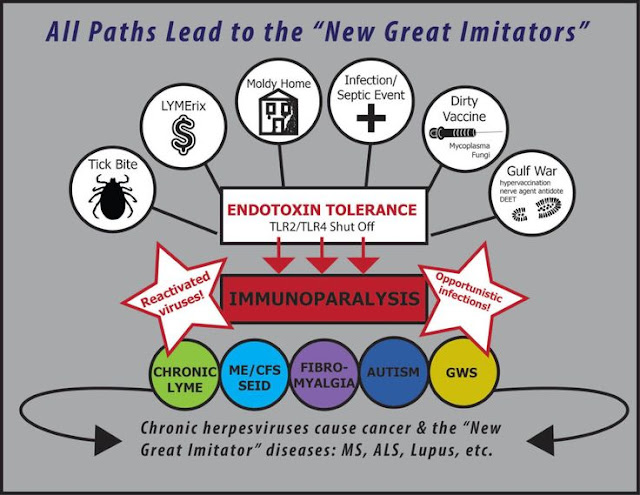 Chronic Lyme is not about autoimmunity or inflammation. It's the exact opposite, immunosuppression or no immunity. It destroys the b-cell germinal centers, causes humoral (in the body or blood stream) immunosuppression but chronic inflammation in the brain and produces no to little antibodies. You may hear it referred to as post-sepsis, endotoxin tolerance, immunosenescence, immunoparalysis, acquired or adaptive immune deficiency. Its all the same, just a different term. It's a non-HIV B-cell AIDS illness where all the opportunistics and secondary infections are what's wrecking havoc from Epstein-barr, coxsackie, herpesviruses, cytomegalovirus, candida, streptococcus (PANDAS), zoster, mycoplasma, etc.,

This is why antibiotics cannot cure Lyme and why some people do feel better while on antibiotics, they are treating the secondary infections. It's also why majority then relapse as soon as they come off antibiotics or shortly after. It's the nature of post-sepsis syndrome. A trashed and mutated immune system. The definition of post-sepsis syndrome is endotoxin tolerance and cross tolerance with reactivated infections of all kinds. Tolerance means the inability to detect or fight this pathogen, cross tolerance means no detection or ability to fight other toll-like receptors or pathogens. People with the MS and Lupus outcomes of Lyme have an autoimmune or HLA-linked response to the secondary opportunistics of sepsis such as EBV, HHV-6, CMV.

“There are other infectious organisms — Epstein-Barr virus, for example — that can produce similar symptoms and may be the real culprits.”  http://well.blogs.nytimes.com/2013/07/08/when-lyme-disease-lasts-and-lasts/

Clifford Harding – OspA causes tolerance, turns off the immune response and detection to TLR7/9 agonists like Herpesviruses, Epstein-Barr and all other viral infections.

”Because IRAK1 is required for TLR7/9-induced IFN-I production, we propose that TLR2 signaling induces rapid depletion of IRAK1, which impairs IFN-I induction by TLR7/9. This novel mechanism,whereby TLR2 inhibits IFN-I induction by TLR7/9, may shape immune responses to microbes that express ligands for both TLR2 and TLR7/TLR9, or responses to bacteria/virus coinfection.” https://www.ncbi.nlm.nih.gov/pubmed/22227568


"Development of endotoxin tolerance following the initial “cytokine storm” phase of sepsis is thought to protect the host from an overexuberant immune response and tissue damage but at the same time, may render the host immunocompromised and more susceptible to secondary infection [18,–20].....Notably, IRAK4 kinase activity was found to be a prerequisite for conferring inhibition of LPS-inducible JNK and p38 MAPK activation following prior exposure to Pam3Cys. These results represent the first systematic analyses of the role of IRAK4 kinase activity in TLR homo- and heterotolerance and pave the way for improved understanding of how IRAK4 kinase dysregulation may underlie immunocompromised states in late sepsis.” https://www.ncbi.nlm.nih.gov/pubmed/23695305http://www.ncbi.nlm.nih.gov/pmc/articles/PMC3714565/

“Toll-like receptors (TLRs) trigger innate immune responses via the recognition of conserved pathogen-associated molecular patterns. Lipoproteins from Borrelia burgdorferi, the agent of Lyme disease, activate inflammatory cells through TLR2 and TLR1. We show that stimulation of human monocytes with B. burgdorferi lysate, lipidated outer surface protein A, and triacylated lipopeptide Pam3CysSerLys4 results in the up-regulation of both TLR2 and TLR1 but the down-regulation of TLR5, the receptor for bacterial flagellin, and that this effect is mediated via TLR2. TLR4 stimulation had no effect on TLR2, TLR1, and TLR5 expression. Human monocytes stimulated with TLR5 ligands (including p37 or flaA, the minor protein from B. burgdorferi flagella) up-regulated TLR5. In addition, TLR2 stimulation rendered cells hyporesponsive to a TLR5 agonist. These results indicate that diverse stimuli can cause differential TLR expression, and we hypothesize that these changes may be useful for either the pathogen and/or the host. https://www.ncbi.nlm.nih.gov/pubmed/16479520

TLR2/1 agonists are fungal and so toxic the body shuts down the immune system to avoid a septic cytokine storm, otherwise, you would die. In turn, it shuts off immunity to all other pathogens including viral, fungal, parasitic and bacterial. Remember, another term for immunosuppression is endotoxin tolerance.

“Endotoxin tolerance protects the host by limiting excessive ‘cytokine storm’ during sepsis, but compromises the ability to counteract infections in septic shock survivors. It reprograms Toll-like receptor (TLR) 4 responses by attenuating the expression of proinflammatory cytokines without suppressing anti-inflammatory and antimicrobial mediators, but the mechanisms of reprogramming remain unclear. “
https://www.ncbi.nlm.nih.gov/pubmed/26457672


Borrelia is the perfect stealth pathogen. The CDC/ALDF made it undetectable in 1994 to 85% of the population who have a septic shock result to TLR2 agonists by changing the testing to a high antibody concentration. Remember, it's opposite of autoimmunity or inflammation. It's global immunosuppression that produces no to little antibodies which is why you can't get a CDC positive Elisa test. Autoimmunity would produce high antibodies. 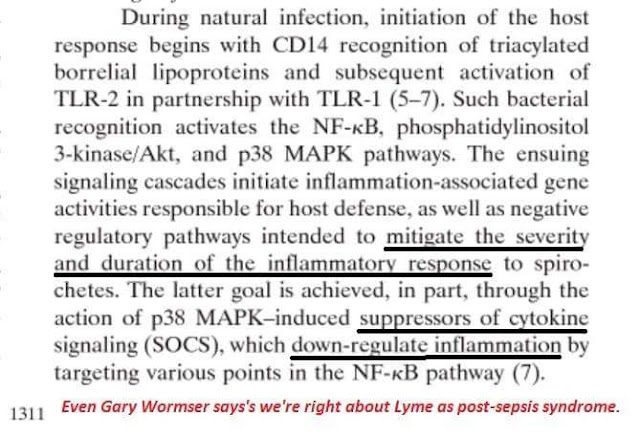 
They made the sickest patients on the planet undectable to pass off a fake vaccine and hide their LYMErix injuries that were also giving people this stealth no antibody immunosuppressive disease. Millions infected but not detected. Sounds like the perfect bioweapon, ya think?! Not to mention the undetected immunosuppressed children receiving vaccines resulting in brain damaging reactivated viruses.

See the Big Picture. Autism vaccines = kids getting the viruses.